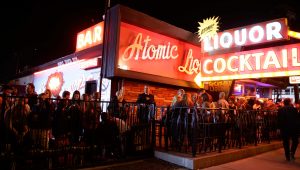 As the oldest freestanding bar in Las Vegas, Atomic Liquors boasts a unique experience that will transport you back to the atomic era of the United States.

Founded by Joe and Stella Sobchik in 1952, Atomic Liquors had the first package liquor license and off-sales permit. In 1952, the Sobckiks constructed a large, wraparound bar and built the famous neon sign that still shines brightly today. When the bar was re-opened in 2012, much of the history of Atomic Liquors was brought back to life through the old school renovations that honor the glory days.

In its prime days, people would order up a cocktail and head to the roof to watch the mushroom clouds erupt over the mountains from the Las Vegas nuclear test site located 50 miles away. If you were lucky, you would spot local Las Vegas legends like as The Rat Pack, Smothers Brothers and Barbra Streisand hanging out at the Atomic bar after their shows on the Strip or in Downtown. The famous downtown cocktail room has even been featured in well-known films and television shows such as Casino, The Hangover and the original Twilight Zone.

A Fun Stop on Your Downtown Las Vegas Pub Crawl

Atomic Liquors is one of the most popular stops on our DTLV bar tour. The Atomic Liquors beer list guarantees you’ll find something that peaks your interest. If you’re not looking for a cold brew, try out one of the many delicious handmade cocktails on the menu. Their seasonal menu offers up a refreshing compliment to the current temperatures. Happy hour at Atomic Liquors offers great prices and a discount to Vegas Pub Crawler groups, so go ahead and splurge on a great cocktail at the oldest bar in Las Vegas.